They had a dynamite new bass player in Jaco Pastorius, a US FM radio community that didn’t run a mile when hearing the words ‘jazz’ or ‘fusion’, and a stunning, chart-busting track ‘Birdland’ with accompanying all-thriller, no-filler album Heavy Weather. They also had an ambitious new management team in Cavallo-Ruffalo of Earth, Wind & Fire (and later Prince) fame who were determined to keep their charges in the unit-shifting business. The band had gone from playing clubs and colleges to concert halls, amphitheatres and festivals, buoyed by Pastorius’s showmanship and the inexorable rise of ‘Birdland’. Zawinul also highlighted another key factor – ‘Without rock’n’roll, none of this could have happened. The rock’n’roll business helped every jazz musician alive today.’ A view possibly not echoed by the likes of Dexter Gordon and Art Blakey… 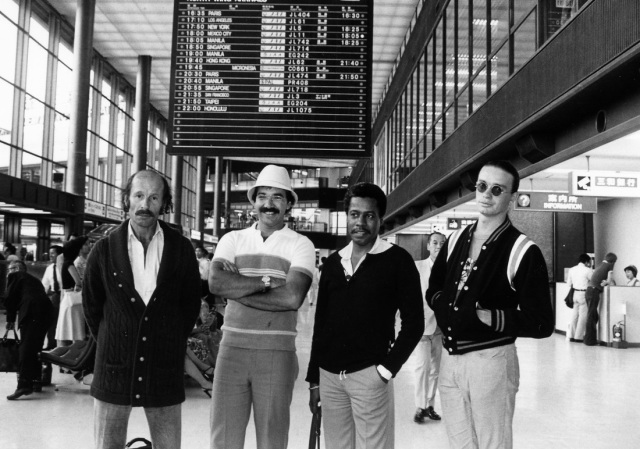 The big question was, how would Zawinul and co follow up Heavy Weather? The die was cast early on in the process when percussionist Manolo Badrena was fired for ‘non-musical reasons’ (though he did appear on Mr Gone as a session player) and drummer Alex Acuna jumped ship citing tour tiredness.

So the dream of a stable band lineup was gone – Weather Report was essentially now just Zawinul, Shorter and Pastorius. And with Shorter busy on solo projects and personal problems and Columbia Records demanding a quick follow-up to Heavy Weather, the responsibility fell mainly on Zawinul’s shoulders to get going on the new album. He quickly realised he was going to have to draw on material recorded by himself at home. Consequently, some tracks on Mr Gone have the meticulously-layered synth sounds and somewhat metronomic grooves associated with home-studio multi-tracking, but the overall effect is always novel particularly on the pan-global groove-fest ‘The Pursuit Of The Woman With The Feathered Hat’.

Pastorius rose to the occasion too – he was at the glittering peak of his career on Mr Gone, co-producing the album and contributing classic tunes ‘River People’ and ‘Punk Jazz’. The former had bass players of the world retreating to their practice rooms to nail his propulsive, octave-laden 16th-note groove (Norman Watt-Roy has said his playing on Ian Dury’s number one hit ‘Hit Me With Your Rhythm Stick’ was entirely down to Jaco’s influence) while the latter featured one of Jaco’s most elegant, romantic themes and a burning Stravinsky-meets-bebop intro.

Weather Report began the Mr Gone project without a drummer but, not surprisingly, the best players in the world were queueing up to contribute. But even this didn’t run smoothly, as Zawinul explained some years later with typical candour: ‘I couldn’t find the right drummer – (Jeff) Porcaro didn’t make it. Then the guy – what’s his name who plays with Paul Simon? Steve Gadd. He was a f***in’ junkie back then, man. He came to my house and slept all night long on the floor. Then I had Tony Williams play. He didn’t feel comfortable because everything was already done, so it was tossing sh*t…’ The comment that ‘everything was already done’ suggests that the basic tricks had been laid down using some kind of early drum machine or even possibly Zawinul’s demo drums.

Tony Williams plays some fantastic stuff on ‘Punk Jazz’ and the title track, but he’s slightly hamstrung by a muddy mix. People sometimes forget that Pastorius was a great drummer too – check out his lopsided cymbal hits and quirky disco groove on ‘River People’. But in the end, Zawinul needn’t have worried – their perfect drummer Peter Erskine walked through the swinging saloon doors just in time to record a version of the Wayne Shorter tune ‘Pinocchio’, originally featured on the classic Miles Davis album ‘Nefertiti’. According to Erskine, it was a first take and he wasn’t ever allowed to do another: ‘It was actually just a soundcheck for the engineer – it was the very first thing we put on tape that morning. I was dismayed during playback because I was playing all over the place, partly to give the engineer variety. I was a little self-conscious that this would be my take on the great “Pinocchio”!’ Erskine is typically modest but his effervescent, devil-may-care pass steals the show and injects Mr Gone with some much-needed virtuosity.

Zawinul’s ‘Young And Fine’ now sounds like a classic composition, though for some critics its post-disco hi-hat was too much to take. With its catchy melody, ingenious harmony and intriguing structure, one wonders why so few jazz bands have covered it. The title track is a Zawinul tour de force, a truly original confection featuring multiple layered synths, a super-hip, prowling bass line and serpentine melody, illustrating the keyboardist’s genius in combining tones and textures. Shorter’s striking ‘The Elders’ is the nearest the album gets to a tone poem, with a spooky tenor sax melody, Pastorius’s percussive bass effects and more ingenious sound-sculpting (and brief vocal cameo of between-take chatter) by Zawinul. The closing track ‘And Then’ features vocalists Maurice White and Deniece Williams, one of the weirdest tracks in Weather Report’s oeuvre, a combination of soul ballad and mood piece showcasing some striking acoustic piano playing from Zawinul and delicious Gadd drumming.

Mr Gone is also blessed with great artwork. Zawinul commissioned the surreal design from Heavy Weather designer Lou Beach who gave the band two covers for the price of one: ‘They told me the title was “Mr Gone” so the back cover illustration – of a Mr Gone figure walking down the night-time streets of New York City – was meant to go on the front. But then there was talk of the album being called “The Pursuit Of The Woman With The Feathered Hat” so I did another piece using a real ostrich feather… They ended up liking the way that worked on the front and kept it there.’

Though Mr Gone quickly went Gold and reached #52 on the US Billboard album chart, the critical reception was certainly mixed – Down Beat magazine published a famous one-star review which grossly offended Zawinul, saying later to a DB journalist, ‘We really care, you know? Hey man, Down Beat is my favourite magazine… I grew up on it, it was my connection to America and it brought me into jazz music.’ But the album has found an audience, particularly among musicians. In 2001, Zawinul said, ‘I talked to John McLaughlin a few times, and he said, “Joe, this is the record I’m listening to. Check it out again!” I definitely will, because I’m not sure…’ And the track ‘River People’ has enjoyed copious airplay and has been subjected to a few excellent remixes.

In 1978, Weather Report was sharing stages with the likes of Santana and Earth, Wind & Fire rather than Keith Jarrett and Ornette Coleman, and ‘Mr Gone’ sounds like it. But it holds the attention superbly, even if it sometimes has the flavour of a studio demo waiting for the right live band to bring it to life. Zawinul, Shorter, Pastorius and Erskine changed course to much more of a jazz direction on the following Night Passage album of 1980, but Mr Gone remains truly unique and a great testament to Zawinul’s imagination and tenacity.