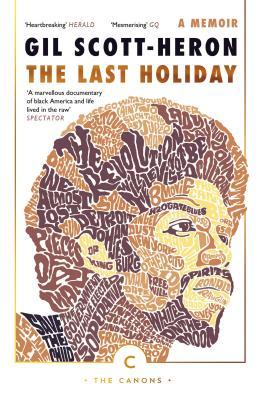 The death of Gil Scott-Heron in May 2011 silenced one of the most potent social commentators of his generation, a singer, songwriter, pianist, novelist and poet most famous for ‘The Revolution Will Not Be Televised’, ‘The Bottle’ and ‘Johannesburg’.

The so-called ‘rough healer’ was also, especially at his late-’70s peak, a star with a big audience who nonetheless effortlessly straddled the private and public – he seems to have made a positive impact on almost everyone he met.

Martin Luther King Day, ‘The Last Holiday’ is by no means an exhaustive account of Gil’s career. Apparently the book was initially intended to simply be a record of the Hotter Than July tour of 1980 when Scott-Heron joined Stevie Wonder (after Bob Marley became ill) to attempt to bring about the legislation to make Dr King’s birthday a US national holiday, which eventually happened in 1986.

So Gil’s memories of the tour and recollections of Stevie form the backbone of the book, and this is anything but a chronological history of his life in music. Indeed he often only discusses his music and the music business when it serves to illustrate a wider issue.

The elegance of Gil’s prose (and occasional poetry) will come as no surprise to anyone who’s read his novel ‘The Vulture’ or enjoyed the wordplay of ‘B-Movie’ or ‘Plastic Pattern People’. And like his best recorded work, the book’s packed with observations that seem to come out of nowhere and stop you in your tracks.

He discusses his native Deep South with great affection but also links it with the death of Dr King and thus the origins of Stevie Wonder’s quest. He also talks in great detail about his education and scholarship to the prestigious Fieldston School in the face of his family’s low income and mother’s serious illness.

Gil’s ruminations on the Stevie Wonder tour are memorable and sometimes laugh-out-loud funny. He claims Wonder could sense his presence as soon as he walked into a room, frequently screaming out his nickname ‘Air-reeez!’ (Gil was born on April Fool’s Day). He perfectly analyses Wonder’s uniqueness, and the book is a must-read for anyone with even a passing interest in Stevie’s life and work.

The section on the death of John Lennon is moving and illuminating in itself, but typically also illustrates a wider point, this time about the media’s insatiable appetite for a negative story. But his tone is always light and philosophical rather than hectoring.

A key theme of the book is the importance of a strong family background. As Gil puts it, ‘I was raised by two women who were both dedicated to my wellbeing… Mistakes have been due to my own poor judgement both of people and circumstances.’ Those mistakes are not alluded to directly and those looking for candid accounts of his well-publicised brushes with the law must look elsewhere.

‘The Last Holiday’ is published by Canongate Books.