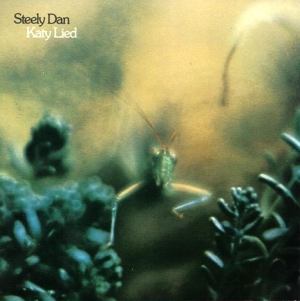 Although sometimes neglected, coming as it does between the ‘Rikki Don’t Lose That Number’-adorned Pretzel Logic (1974) and the sleek, funky Royal Scam (1976), Katy Lied (1975) is generally considered the Steely album where they really started to get things right and the Becker/Fagen/(producer) Gary Katz trinity developed its trademark sound.

21-year-old drummer Jeff Porcaro provides rock-solid rhythm foundations throughout (if only they’d discovered him in time for the first two albums), Michael Omartian‘s beautiful Bosendorfer piano is pushed right to the front of the mix and there’s far more consistency in the songwriting. The album has the intimacy, warmth and simplicity of a classic late-’50s jazz record. Gone are the humorous miniatures and flirtations with country but luckily for us illicit sex, drug use, booze, mid-’70s spiritual ennui and generally the darker sides of human nature are still the Dan’s lyrical currency, outlined in full in Becker and Fagen’s hilarious liner notes written for the 1999 CD remaster. 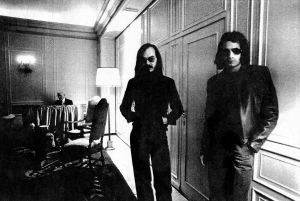 The songwriters are increasingly looking more towards jazz now, gloriously illustrated by Phil Woods’ soaring alto break on ‘Dr Wu’, Carlton’s tasty guitar playing and the constant presence of Victor Feldman on marimba, vibes and assorted percussion (the only musician apart from Becker and Fagen to appear on all the Dan albums). There’s also a suggestion of Gil Evans‘ ‘middle-register brooding’ (Fagen’s words) in the woodwind arrangements on the closing ‘Throw Back The Little Ones’.

‘Your Gold Teeth 2′ is an ambitious bebop-meets-Bob Dylan track which prefigures some of the more challenging sections from Aja‘s title track. ‘Any World That I’m Welcome To’ seems somewhat of an anomaly in the Dan discography appearing to be a very sincere first-person narrative about loneliness and the end of innocence. But look deeper and it reveals itself as a first-rate pastiche of early/mid-’70s singer-songwriter indulgence, riddled with the trinkets of that period’s musical counterculture (wheezy Hammond organ, phased ‘hippy’ guitars, Hal Blaine‘s over-stiff LA drumming) and rammed home by Fagen’s amusingly-anodyne vocal ad-libs (‘Yes, I’m talkin’ about any world…’).

The cover’s funny too – a katydid photographed soft-focus, Hollywood starlet-style.

Unfortunately even remastering hasn’t remedied some of the infamous sound problems well-documented in various interviews at the time – some of Porcaro’s subtleties are lost in a very murky mix on ‘Bad Sneakers’ and ‘Black Friday’, though ‘Dr Wu’ and ‘Your Gold Teeth 2′ sound simply sparkling.

Katy Lied was a reasonable success but failed to supply a big hit single, ‘Black Friday’ and ‘Bad Sneakers’ stalling in the US charts at #37 and #103 respectively. The album also prefigured a change in tack from Becker and Fagen, moving towards funky Bernard Purdie beats, twisted disco and reggae, clavinets and phased electric pianos on the following year’s Royal Scam, only going to show how versatile they were as songwriters. The shift from Katy Lied to The Royal Scam was the equivalent of Miles Davis making Birth Of The Cool and then going straight on to Bitches Brew. Katy is a stunning, cohesive album and the beginning of a staggering run of form up to and including Gaucho (1980).