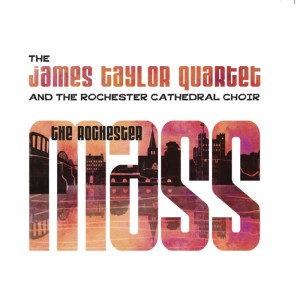 Here’s a real curveball that gives a new meaning to the word ‘fusion’. The James Taylor Quartet have always been known for their reliable brand of Brit jazz/funk but now they’ve come up with one of the most surprising and impressive releases of the year.

Jazz has been fused with all kinds of music styles but you probably wouldn’t have bet on it getting a choral makeover. Written entirely by Taylor partly in tribute to his late father, The Rochester Mass pits his Fender Rhodes-based classic jazz/funk sound against the 40-strong Rochester Cathedral Choir and comes up with something entirely original.

We are thrust unceremoniously into this new soundworld with opener ‘Sanctus Part One’ which combines light funk in 7/8 and ethereal vocal flavours. ‘Sanctus Part Two’ adds a hefty dose of bass pipe organ to the mix while ‘Agnus Dei Part One’ foregrounds some very unexpected chord changes.

The Rochester Mass is the kind of thing you might have expected 20 years ago from Keith Jarrett, Bill Bruford or Michael Garrick, but it’s a great surprise coming from such a stalwart of the jazz/funk scene.

Recorded in just six hours at Angel Studios in North London, it’s also an amazing production job by Taylor – the choir sounds like it is coming to you from the stage of Westminster Abbey. Also, in a world of over-long CDs, the album is pleasingly brief at just over 33 minutes, but it still feels like a complete piece of music.

One hopes that the Mercury Prize voting panel are listening; The Rochester Suite is adventurous, original, always listenable and surely one of the albums of the year.

The Rochester Mass is out now on Cherry Red.