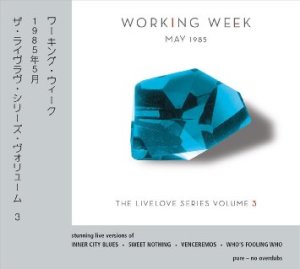 Excerpts taken from my liner notes for the new Working Week live album:

Does jazz go into pop? Judging by the current music scene, the answer would appear to be an unequivocal ‘no’, but, for a golden period in the early-to-mid ’80s, it seemed as if the two styles could happily co-exist. Artists like David Sylvian, John Martyn, Hue and Cry, Elvis Costello, Kate Bush, The Rolling Stones, Sting, Danny Wilson, Swing Out Sister, Joe Jackson and Everything But The Girl smuggled some cool chords into the charts introduced the pop audience to players of the calibre of Kenny Wheeler, Harry Beckett, Lester Bowie, Michael Brecker, Ronnie Scott, Eberhard Weber, Sonny Rollins, Guy Barker, Kenny Kirkland and Branford Marsalis. Sade, Carmel, The Style Council and Matt Bianco’s fusion of jazz and pop wasn’t everyone’s cup of tea but all of them had big hits. The Stranglers’ ‘Golden Brown’ was a jazz waltz (with a few bars of 4/4 thrown in) which got to number one!

Though older British jazzers such as Stan Tracey, Keith Tippett and Mike Westbrook (and some younger ones too) naturally viewed this latest revival with some suspicion, at least it was a relief from the extremely precarious ’70s when rock, funk and fusion almost subsumed jazz. The old guard hung on, gigging in the back rooms of pubs, picking up occasional free improve shows in Europe or moonlighting in West End pit orchestras. But then punk came along, and it affected more than just disenfranchised young rock fans – its DIY ethos breathed new life into jazz too. Bands like Rip Rig + Panic and Pigbag made huge strides in engaging a youthful, receptive audience. Pigbag even made it onto ‘Top Of The Pops’…twice!

But it was Working Week, co-founded in 1983 by saxophonist Larry Stabbins and guitarist Simon Booth, who really typified the successful fusion of jazz and pop in mid-‘80s. Formed in 1983 from the ashes of jazz/post-punk outfit Weekend (whose ‘The View From Her Room‘ was a confirmed early-’80s club classic), initially Working Week was almost the de facto house band for the emerging scene, with the infectiously exuberant IDJ dancers often joining them onstage. Brit National Treasures™ Robert Wyatt and Tracey Thorn duetted on classic single ‘Venceremos – We Will Win’ which briefly made an appearance on the UK singles chart in late 1984. The accompanying album Working Nights, featuring other Brit jazz legends Guy Barker, Harry Beckett and Annie Whitehead and produced by Sade’s regular helmer Robin Millar, reached a sprightly number 23 in the UK album chart soon after…

Much more on the ’80s London jazz/dance scene to come.