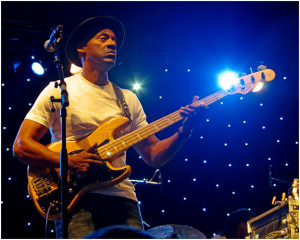 An all-jazz residential UK festival – who’d have predicted it? Spread over an idyllic estate in rural East Sussex, Love Supreme’s USP was reflecting the music’s broad church and it certainly delivered on that score with barely a whiff of smooth jazz. Jazz’s liberation from club and concert hall also seemed to liberate audiences; Go […]

Here’s one out of left field. Despite his occasional flirtations with fusion, Nicholas Payton has hitherto been known as somewhat of a traditionalist, one of New Orleans’ best young straight-ahead trumpet players of the last 20 years or so. But now he’s produced the uncompromising Bitches, essentially a one-man-band concept album with special guest vocalists including […]