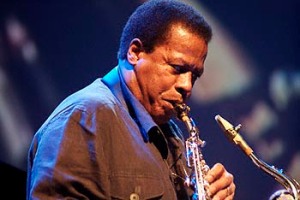 It’s always interesting to hear jazz away from a club or concert hall, and both the unique location and musical content made this a very interesting evening indeed.

The always-interesting Tomorrow’s Warriors started off the second night of Wayne Shorter’s Barbican residency with a mixture of the saxophonist’s early compositions for Art Blakey’s Jazz Messengers and originals by this young, talented London band.

Trumpeter Jay Phelps’ ‘Tyrant’s Tale’ was an engaging and ambitious suite, full of tricky time signatures and enigmatic chords, like a fusion of Return To Forever and Carla Bley. Phelps delivered a fine solo reminiscent of Terence Blanchard and Lester Bowie with a big, throaty tone.

After the break, pianist Martial Solal joined Wayne Shorter for an hour of totally spontaneous playing. Nothing prepared me for the energy and eloquence of these gentlemen, especially after watching Shorter barely make himself heard above his band at the Festival Hall a few years ago.

Tonight he was on top form, strolling around the stage, delivering heartfelt, incisive and totally unique musical statements. He seems to relish the challenge of completely improvised music, never ducking out of a risky melodic venture.

Solal stayed with him every step of the way, laying down a fascinating counterpoint made up of sprightly bebop runs, waltz-time vamps and ominous avant-garde rumblings. An endlessly creative improviser, his playing suggested lots of good things – Ravel, Ellington, Jarrett, Petrucianni.

The sum total of these two masters’ musical sketches was a whole new soundworld, touching on jazz and classical forms but not dependent on either. Their closing embrace and Wayne’s huge grin confirmed that this was a very special concert indeed.