Book Review: Forces In Motion (The Music And Thoughts Of Anthony Braxton) by Graham Lock 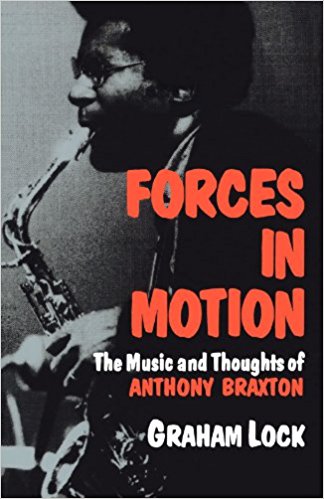 Is it possible to enjoy a non-fiction book about a musician whose work you’ve never heard? I would probably have said not before I read Graham Lock’s excellent ‘Forces In Motion’ recently.

Concerning the music, life and philosophy of Anthony Braxton – possibly the most recorded solo artist in jazz history – the book mainly centres on Braxton’s 1985 UK tour, a period when he was one of the music’s most respected, prolific but also controversial figures (he doesn’t even get an entry in Gary Giddins’ panoramic ‘Visions Of Jazz’).

These things are all relative. But the ’80s seemed to divide opinion on many grounds – political, musical, you name it. Braxton is a prodigious composer (his oeuvre already numbered around 350 titles by the mid-’80s) and multi-reed man who emerged from the Chicago AACM scene, his penchant for such ‘conservative’ jazz icons as Paul Desmond and Warne Marsh and composers like John Cage and Stockhausen attracted much attention.

Friend and collaborator Wadada Leo Smith once said, ‘Listening to Braxton’s music, one can easily hear the unfolding of his select cultural heritage along with the collective heritage of all humankind.’ Despite that, many of his compositions remain unrecorded, thanks to what he once referred to as the ‘what makes you think you can play classical music, n***er?’ syndrome.

In ‘Forces In Motion’, one-time Wire and NME writer Lock follows Braxton and his band (Marilyn Crispell on piano, Mark Dresser on bass, Gerry Hemingway on drums) on tour around the UK and interviews them all at length. The book’s attraction is three-fold: it becomes a fascinating, sometimes amusing portrait of travelling jazz musicians, an indepth study of Braxton’s career and preoccupations – from slavery and poverty to Reaganomics, chess, ancient Egypt and feminism – and also a marvellous survey of the ’80s UK jazz revival. Lock asks all the right questions and writes with great passion on jazz, race relations and Thatcherism.

It was fascinating reading the book while resisting listening to any of Braxton’s music. But I’ve heard bits and pieces now and will continue to explore. I hope you do too. Not much can be gleaned about Lock. I hope he’s still writing. His book has the depth of a great documentary. I wish a camera crew had followed him around too.