Book Review: Pressed For All Time by Michael Jarrett 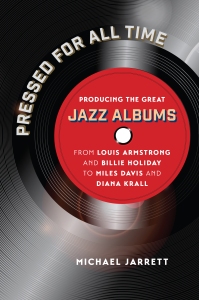 It’s a conundrum: how to preserve for all time something as quintessentially ephemeral and improvisatory as a jazz performance. So-called ‘red-light fever’ – the terror of preserving a take for eternity when the ‘record’ button goes on – has haunted the careers of a fair few jazz masters. And yet the music is littered with great, epochal studio albums. So how does the producer facilitate this seemingly contradictory process?

Michael Jarrett’s excellent ‘Pressed For All Time’ is the story of jazz record production told by the producers themselves. To a certain extent, Jarrett’s book is ‘limited’ by the access he gets to a select group of interviewees – but what a group: Teo Macero, Tommy LiPuma, George Avakian, Joe Zawinul, James Blood Ulmer, Joel Dorn, Bob Weinstock, Sonny Rollins, Bill Laswell, Ornette Coleman, Creed Taylor, plus many more. Macero, Avakian and Dorn in particular let rip with some thrillingly uncensored memories.

On one level, ‘Pressed For All Time’ serves as a brilliant ‘making of’ guide to some of the greatest jazz albums: Concert By The Sea, Time Out, Ellington At Newport, Kind Of Blue, Breezin’, Come Away With Me, Ah Um, Jazz Samba, A Love Supreme, Genius + Soul = Jazz, Something Else!!!!, Saxophone Colossus, Out To Lunch, Lady In Satin…

But Jarrett – professor of English at Pennsylvania State University – doesn’t stop at Bitches Brew: he focuses on jazz albums in the digital age too. In fact, more than half the book is dedicated to music made since the 1960s. And while there’s enough technical jargon for the serious hi-fi buff or burgeoning producer, this is a book mainly about relationships. After all, the jazz producer is as much a psychoanalyst as a businessman.

Several jazz myths are busted in the book: Miles didn’t instruct Monk to lay out during his solos on Bags Groove. And Duke forewarned Paul Gonsalves about the endless choruses of ‘Diminuendo And Crescendo In Blue’ at Newport in 1956. Then there are the quality anecdotes: Ed Michel talks about having to flicker the studio lights (or, if he was playing with his eyes closed, go out into the performance area and tap him on the shoulder!) as a signal to Pharoah Sanders that he had been playing for 20 minutes (i.e. one side of a vinyl album) and it was time to wind things down.

But my favourite story concerns the time Teo Macero had to go backstage at the 1970 Isle Of Wight Festival to ask the assembled joint-smoking rock bands about mic placement for Miles’s set. You’ll have to read this superb book to find out what happened next.

‘Pressed For All Time’ is published by The University Of North Carolina Press.