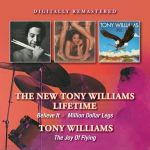 I’ve just had the pleasure of writing the liner notes for a new Tony Williams 3-CD collection, focusing on the mid-to-late 1970s, a period when the jazz/rock drum legend made some of the most electrifying music of his career.

Here’s an excerpt from the liner notes with some musical highlights included. We join the action at the end of the 1960s, when Tony has just left Miles Davis’s band for the last time:

As the 1970s beckoned, Williams was looking beyond jazz to new fusions. He had always loved The Beatles, Motown, Cream and Jimi Hendrix, so the formation of Lifetime in 1969 seemed a natural progression. But this was jazz/rock, not the watered-down ‘fusion’ which emerged later in the ’70s. The project, featuring John McLaughlin on guitar and Larry Young on organ, was an incredibly potent, volatile mix, surely the loudest organ trio ever heard.

Lifetime ploughed on through various line-ups, by 1974 consisting of vocalist Laura ‘Tequila’ Logan, bassist Jack Bruce and Yorkshire-born guitarist Allan Holdsworth, the latter tipped off to Williams by Weather Report bassist Alphonso Johnson. Holdsworth’s fiery, flowing legato lines – played with a Gibson SG put through overdrive, phaser and volume pedals – were constantly delivering the shock of the new, and astonishing everyone who heard them.

Inspired by his guitarist, and also presumably the huge success of Hancock’s HeadHunters, John McLaughlin’s Mahavishnu Orchestra and Chick Corea’s Return To Forever, Tony was ready to take Lifetime back to primal, instrumental jazz/rock, and began looking for new members. He may also have been inspired by two electrifying albums he had just played on – Stanley Clarke’s self-titled 1974 classic also featuring Bill Connors on guitar and Jan Hammer on keyboards, and also Chet Baker’s You Can’t Go Home Again.

Holdsworth recalls the early days of the New Tony Williams Lifetime: ‘I was staying at Tony’s house for a while, a tall townhouse at 141st Street and Broadway. There were a couple of top floors he didn’t use and he’d let me stay there. We would play all the time. For a while, Lifetime was just me and Tony. There were no other members, so different bass players would come by until we found someone he really dug. Jeff Berlin came by and so did Jaco Pastorius. It was an interesting time.’

The Believe It quartet had produced some fantastic music over the two albums they were together. But then Columbia asked Tony to fulfill his contract and deliver another solo album. The Joy Of Flying was speedily put-together. He didn’t contribute any compositions, but produced and showcased his drumming in a variety of musical situations, from avant-garde through to fusion and hard rock.

His main collaborator was Jan Hammer, who remembers Williams with great fondness: ‘All I can say is that he was always my absolute, hands-down favourite drummer. He could basically disrupt the time/space continuum! There’s no other drummer who can do that.’ They recorded two tracks together at Hammer’s Red Gate home studio in upstate New York, an experience which left the Prague-born keyboardist with precious memories: ‘It was an incredible feeling to have Tony playing in my studio. He was really at the peak of his powers. There were certain pieces of music I had that I knew would lend themselves to his playing.’

The legacy of Williams’ 1975–1979 era lives on: ‘Fred’, ‘Proto-Cosmos’ and ‘Red Alert’ have become jazz/rock standards, played to this day by Holdsworth and various Tony tribute bands that he has participated in. Holdsworth’s composition ‘The Drums Were Yellow’ from 2000’s Sixteen Men Of Tain was also a tribute to Tony. Modern drum maestro Vinnie Colaiuta recorded a fine solo album in 1994 which featured ‘Slink’, a quite brilliant homage to the Believe It-era sound.

Tony’s influence prevails, as a drummer, composer and bandleader. His uniqueness can never be erased. As Holdsworth said recently of his friend, ‘I learned so much from Tony. He is the reason I never give musicians who play with me any direction on how to approach anything. He never did that with me. He made me find my own way. Nobody played like Tony. When he switched from the jazz thing to whatever you would call what Lifetime did—fusion, I guess—no-one had ever heard anybody play the drums like that. I still have never heard anyone who does…’

Read the full set of liner notes inside the Believe It/Million Dollar Legs/The Joy Of Flying collection, out now on BGO Records.