The ‘cry’ takes many forms – you can hear it in Aretha Franklin, Carlos Santana, Miles, Albert Ayler and reedsman David Murray too, and it was very much in evidence during Saturday’s electrifying London Jazz Festival gig at the Cadogan Hall.

What initially seemed a strange choice of venue for this bass-less supergroup turned out to be a masterstroke. The stage was decked out in beautiful blue and red gels, vaguely echoing the cover design for the MCA Power Trio’s debut album Perfection, and an initially soporific audience ended the night with a prolonged standing ovation.

Perfection‘s compositions came to life here. The lack of bass was scarcely noticed; a vacuum of tonal frequencies was occupied instead by Murray’s bass clarinet (remarkably cello-like at times), Carrington’s insistent kick drum or Allen’s intrepid left-hand comping, complete with her own patented voicings. 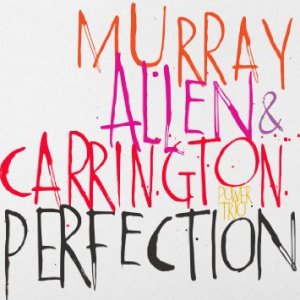 On the opener ‘Mirror Of Youth’, a busy 6/8, Carrington embellished her standard kit with a tambourine/hi-hat combo, shakers and bells. With loose wrists and a huge array of single-stroke roles, she provided a constant dialogue with Allen and Murray.

Allen’s solo introduction to ‘Barbara Allen’ was poignant and striking, with not a single note wasted, while ‘The David, Geri & Terri Show’ had an old-school R’n’B vibe built on a simple but irresistible piano vamp. ‘Samsara’, Carrington’s shimmering tribute to Wayne Shorter, showcased Murray’s tonal and melodic range, a barrage of harmonics and depth-charge low frequencies.

The Monk-like ‘For Fr. Peter O’Brien’, Allen’s ode to Mary Lou Williams‘ treasured confidante, summoned a tender, gentle mood, gradually working in some intriguing tempo changes too. In direct contrast to that was the set’s centrepiece, ‘Perfection’, the Ornette Coleman composition that opened out into a furious free section with Allen almost approaching Cecil Taylor‘s soundworld.

This was a mesmerising gig informed by gospel, jazz and blues, with a strong undercurrent of the avant-garde. Whilst it seems unlikely that this band will perform at the White House any time soon, the MCA Power Trio provided a small but powerful beacon of hope in this new world. Go see.

← Rescued From The Vaults: Bennie Maupin’s Moonscapes/Slow Traffic To The Right
Movie Review: ‘Round Midnight’ (1986) →