Allan Holdsworth @ 70: Five Of The Best 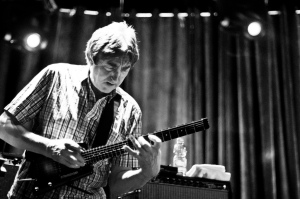 There’s an alternative, fantasy version of the BRITS Lifetime Achievement award where the likes of Allan Holdsworth get the recognition they deserve from their native music industry.

Of course that’ll never happen, so let’s just celebrate the 70th birthday of one of the great British musicians. Allan will never sell the amount of albums to even put a blip on the radar of most music fans, but he revolutionised his instrument and influenced legions of musicians in the process.

Of course his work with Tony Williams, Bill Bruford, Stanley Clarke, Level 42 and many others is highly recommended, but I’m going to focus on his solo career for this brief best-of. Happy 70th birthday to a bona fide Brit legend.

A terrific composition featuring a brilliant contribution from Tony Williams on drums.

It’s always intriguing to hear Allan blowing over someone else’s chord changes, in this case keyboardist/composer Steve Hunt’s, and these two solos are among his best. And check out drummer Vinnie Colaiuta’s ridiculous drum accompaniment.

For many fans, this is the quintessential Holdsworth track, featuring two superb solos which demonstrate what he’s all about. It even has a catchy melody.