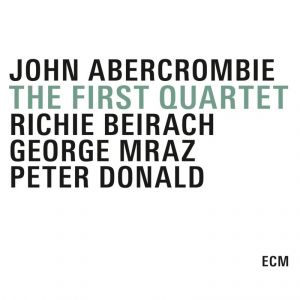 For some reason (could it be the name?) American guitarist John Abercrombie has never really received the same kind of attention as his contemporaries John Scofield, Pat Metheny, Bill Frisell and Mike Stern.

His career has been modest and craftsmanlike in comparison, starting out, in his words, as a ‘John McLaughlin rip-off’, playing on ‘some of the worst fusion albums ever made in the ’70s’! But, over 40 years, he has built up a sizeable and very impressive body of work, with lots of distinct eras.

As a leader, he’s possibly best known for his trios on ECM featuring the likes of Peter Erskine, Jan Hammer and Dave Holland, but he has also been a very significant sideman on key albums by Kenny Wheeler and Jack DeJohnette.

But now a three-album ECM box set highlights some of Abercrombie’s least-known but best music, a period between 1978 and 1981 when he fronted a touring quartet (featuring pianist Richie Beirach, bassist George Mraz and drummer Peter Donald) which recorded the albums Arcade, Abercrombie Quartet and M, none of which have made it onto CD in Europe until now.

Abercrombie had really got his sound together by 1978. On Arcade, he mainly sticks to his ‘mandolin guitar’, a three-quarter scale instrument tuned an octave higher than a regular guitar. With the addition of some delicious stereo delay, the overall effect is stunning, and it suits the elegant compositions beautifully.

Arcade is a strikingly cohesive album with a consistency of tone and mood; it sounds like an ECM classic from its first bars. Abercrombie and Beirach in particular have an almost telepathic rapport, consistently picking up on each other’s phrases, particularly on ‘Nightlake’.

On ‘Paramour’, Beirach plays a stunning, extravagant, Jarrett-like solo, while ‘Neptune’ is also a standout with its eerie Mraz bowed melody and lovely, ambient vibe. But finally it’s the ensemble playing that stands out.

The second album Abercrombie Quartet is a much tougher but ultimately rewarding listen. The compositions are generally impressionistic with more of a modal feel. A tune like Abercrombie’s ‘Blue World’ leaves drummer Donald with a lot of work to do to maintain interest, and Beirach also often sounds agitated and somewhat hyperactive during the many one-chord sections.

But ‘Stray’ is an interesting contrast, a real change of pace with loads of chords thrown in. Abercrombie’s 12-string acoustic also shines through on the elegant and memorable closing ballad ‘Foolish Dog’.

M, the third and weakest album in the set, has an distincly un-ECM-like directness in terms of mix and mastering – Donald’s drums sound brittle and over-compressed while Mraz is stuck out on the far left channel for some unknown reason. But there’s some arresting music; the opening ‘Boat Song’ features an extended ambient opening with Abercrombie’s ingenious string pinching and false harmonics sounding like distant bells out at sea.

The attractive title track is very reminiscent of Bright Size Life-era Metheny and Abercrombie’s acoustic ballad ‘To Be’ is also a winner. The perky ‘Flashback’ even sounds a bit like Barbara Thompson’s Paraphernalia. But, in general, the song title ‘What Are The Rules’ could refer to the rather wayward feel of the album.

Taken as a whole, though, this box set is a really worthy addition to Abercrombie’s discography and the three albums definitely deserve reappraisal. The fact that they all sound pretty distinct from each other is also no small achievement. I will now be eagerly searching out some more music by the effervescent Richie Beirach.