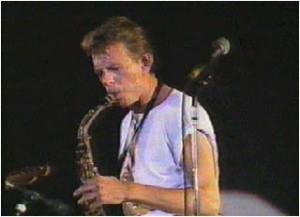 A cursory scan through David’s career confirms that he was a big jazz fan. His first instrument was the sax (he had some lessons from Ronnie Ross, later employed by David to play the famous solo on Lou Reed’s ‘Walk On The Wild Side’) and he loved Mingus, Parker and Coltrane.

Check out this interview he gave to Courtney Pine about his love of jazz saxophone.

From early on in his solo career, Bowie knew how jazz players (usually of the more avant-garde hue) could enhance his music, and their vital contributions were very much a bi-product of his talent as a producer; he always seemed to know exactly which ‘flavours’ would enhance a song, and also knew how to direct musicians to achieve the effects he wanted.

So here are six jazz-flecked classics from across David’s illustrious career.

Surely no-one could have predicted how wholeheartedly David would embrace wigged-out jazz forms on this epic lead-off track from his final compilation album Nothing Has Changed. Written in collaboration with Maria Schneider, saxophonist Donny McCaslin and trombonist Ryan Keberle get a lot of solo space on this disturbing tale of betrayal and murder.

In some ways the centrepiece of Bowie’s underrated album 1. Outside, this epic suggests that Miles Davis’s Aura had been on his turntable. Across slow-moving chords, pianist Mike Garson embarks on some Brad Mehldau-esque counterpoint, guitarist Reeves Gabrels comes over all Frisell-like and Erdal Kizilcay’s fretless bass lends some Nordic (or should that be Turkish) iciness.

Perhaps it was always on the cards that David should seek out his namesake, the late great trumpeter Lester. He plays various intriguing solos throughout the Black Tie White Noise album but his witty interlude in this always hits the spot. Elsewhere on BTWN, the jazz connection is reinforced by the presence of legendary horn arranger Chico O’Farrill.

A fascinating mash-up of breakbeats, real drums, bonkers piano (Garson again), synth strings and trumpet, this was the jazziest cut on Bowie’s gripping Buddha Of Suburbia album. The man himself even pops up with a delightful little sax cameo towards the end.

I’m pretty much contractually obliged to include this collaboration with Pat Metheny and Lyle Mays, a rare – though not altogether satisfying – Bowie detour into the world of mid-’80s ambient pop/jazz. He delivers a superb, soaring vocal and intelligent lyric, and the song was a hit, though the end result is somehow underwhelming.