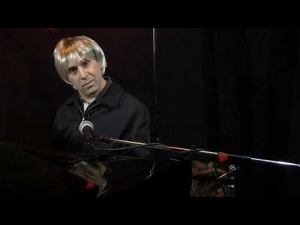 Does humour belong in jazz? It’s a tough one, whichever way you slice it.

Jazz and comedy were certainly frequently intertwined in the ’30s. Later, Spike Jones‘ incredible bands often featured jazz musicians and consistently tickled the funny bone though rarely at the expense of jazz itself – he mainly used the virtuosity of his players to humorous effect.

Stan Freberg also occasionally incorporated jazz licks into his comedy records, though usually as an affectionate nod to the hipster life.

We must also mention Lord Buckley whose hilarious hipster poetry was sometimes accompanied by live jazz, and also the wry singer-songwriter stylings of Mose Allison, Ben Sidran and Dave Frishberg.

But what about when jazz has been used to parody itself? Frank Zappa regularly employed jazz sidemen and obviously adored Eric Dolphy, but wasn’t beyond ridiculing aspects of jazz, inserting quotes from Ellington and Herbie Hancock’s Headhunters usually to disparaging effect.

He also recorded ‘Yo Cats’, an attack on what he saw as the soulless, debasing world of the multi-tasking jazz sessionman elite. Ike Willis’s spot-on crooning and the track’s sumptuous jazz chords (courtesy of keyboard player Tommy Mars) somehow make it even more shocking.

The Bad Plus have arguably flirted with comedy jazz too, particularly in their treatment of covers such as ‘Smells Like Teen Spirit’. Closer to home, Mike Westbrook’s 1980s jazz cabarets were clearly somewhat taking the michael, and, more recently, Shatner’s Bassoon have made a funny jazz noise or two.

But if jazz is America’s classical music, it’s yet to discover its own Victor Borge. Or is it? The latest issue of Jazzwise features an excellent interview with Brad Mehldau in which he mentions that Larry Goldings has branched out into jazz comedy with his Hans Groiner alter ego.

Groiner is an Austrian pianist and jazz fan who wishes to pass on his knowledge to us including how to play Monk’s ‘Blue Monk’ and ‘Well You Needn’t’ in a Richard Clayderman style (and there’s a load more Groiner on YouTube).

You have to admire Goldings’ balls in messing with the mechanics of jazz. Maybe showing us what it isn’t perfectly emphasises what it is. I’ll certainly be listening to Goldings’ ‘serious’ music a lot more closely now.