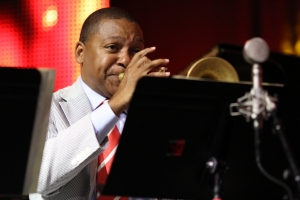 He’s one of jazz’s most controversial and iconoclastic figures, a thoroughbred trumpet player with chops and opinions for miles; keeper of the pure jazz flame since his emergence as part of Art Blakey’s Jazz Messengers in 1980, guarding against Fusion, Nu-Jazz, Acid Jazz, Jazz/Funk, Avant-Garde Jazz and all post-1967 developments; an erudite educationalist, a natural, gifted teacher and one of the key contributors to Ken Burns’ epic ‘Jazz’ series of documentaries that aired on PBS and the BBC in 2000. His mastery of his instrument inspired many great jazz players who emerged in the ’80s and ’90s such as Courtney Pine to get serious about this great American music and their contributions to it. And he’s at the apex of the impressive Lincoln Center in his role as Artistic Director, passing on all he’s learned to the next generation of jazz greats.

So what is it about Wynton Marsalis that winds people up so much? His spats with Miles Davis about the legitimacy of different forms of jazz were legendary, though Davis always defended his trumpet technique. Treasured Miles drummer Tony Williams performed with Marsalis on the latter’s acclaimed debut album in 1981, but by the start of the next decade was trash-talking about his opinions and acolytes. Yet what remains unquestionable is Marsalis’s mastery of trumpet technique based on a cocktail of influences including King Oliver, Louis Armstrong, Clark Terry and, yup, Miles Davis.

Marsalis was in town to help celebrate the fifth anniversary of Ronnie Scott’s refurbishment and would seem the perfect man for the job – a huge name with a huge, loyal following. As Ronnie’s MD Simon Cooke said onstage before the first much-anticipated show, Marsalis could surely have played for a week in a far bigger venue. But, as it turned out, his intimate, bluesy, good-time music was perfectly suited to Ronnie’s.

Snappily-dressed to a man, the band opened up with a very simple blues set to a subtle Second Line beat with some lovely tangential piano from Jonathan Batiste, reminiscent of Thelonious Monk in its major/minor ambivalences and nice sense of space. ‘April in Paris‘ and Django Reinhardt’s ‘Minor Swing‘ were nothing less than trumpet masterclasses. Marsalis played completely unamplified, directing his sound around the room in the manner of a classically-trained actor and using the mute to explore all the tonal possibilities of the horn. And he injected some lovely blues grit as well, drawing howls of approval from the Ronnie’s crowd. Bassist Carlos Henriquez contributed a gloriously melodic solo with a side order of Keith Jarrett-like vocalisms, leading Marsalis to delightedly remark, ‘Yeah, sing it to yourself!’ Marsalis was in jovial mood throughout, goosing his young band, chatting with the front row and speaking at length between songs, at one stage talking of harmony in jazz as being ‘both horizontal and vertical’, and revealing that he had once asked composer Leonard Bernstein for his concept of harmony only to be told: ‘It’s like a house’.

What Marsalis and band delivered was a sometimes subtle, always swinging brand of jazz infused with the blues without pyrotechnics or concessions to the post-’60s ‘European’ influence, and there’s surely a place for that. His notions about what jazz is and what it ain’t will always get up people’s noses, but there’s no denying his prowess as a trumpet player and his overriding passion for America’s classical music.