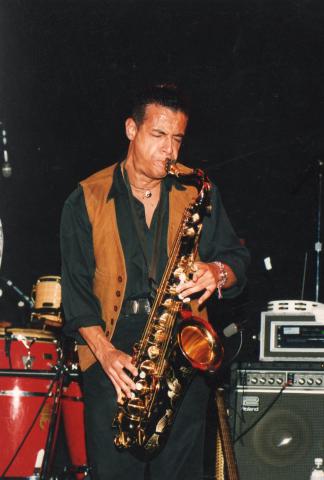 Tenorist Patrick Clahar is an important though somewhat unsung figure on the Brit jazz landscape. He’s appeared on some of the key jazz and jazz/funk albums of the last 20 years including Incognito’s Tribes, Vibes and Scribes, Jason Rebello’s Keeping Time and Omar’s Music and he was also involved in incarnations of Bill Bruford’s Earthworks and The Jazz Warriors. Early indications suggested he was a fluid, light player in the Grover Washington Jr mode, but he’s since developed into a fine leader in his own right with a swaggering tone reminiscent of Sonny Rollins.

Tonight’s 606 gig featured the formidable Julian Joseph on piano and the energetic and incredibly youthful rhythm section of John Scott on drums and Dylan Moran lookalike Adam King on bass. Joseph immediately injected drama and intrigue into the mid-tempo opener with some exciting polyrhythmic comping and a challenging solo. His composition ‘Language of Truth’ brought out the best in Clahar who reeled off a stunning Greg Osby-style modal outburst before more fireworks from the pianist. Some exquisite brushwork from Scott buoyed up the set’s lovely ballad, and King’s melodic solo was a treat and a fine mini composition of its own. The closing take on Herbie Hancock’s ‘The Sorcerer’ was perfect for this band, with Joseph’s oblique harmonies rubbing up pleasingly against the strictly swinging bass and drums.