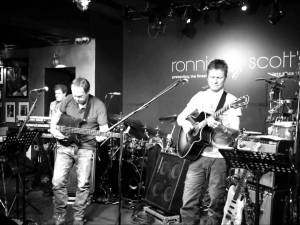 Bass legend and mainman of pop/funk/fusion titans Level 42 for the last 30 years, Mark King has flirted with the J word intermittently throughout his career. Early on in their tenure, the band were seen as a kind of English Weather Report, marrying funky, rock-solid basslines and jazz/soul keyboards with danceable rhythms.

But then King almost jumped ship in 1982 to join a fusion power trio being set up by guitarist Jeff Beck, but declined at the last minute. Oddly, Level 42’s left turn into a more slick, commercial sound in 1984 also coincided with King’s debut solo album Influences which was nothing less than a fusion classic, referencing Return To Forever, The Mahavishnu Orchestra, Stanley Clarke and Cream. But apart from the occasional stretch, King and co have seldom returned to challenging improvised music over the last 20 years or so – until now.

So there were high hopes for this gig billed as Mark King And Friends. Things looked even more promising when analogue synths and a huge percussion rack were spotted clogging up the famous Ronnie’s stage. What special guests would the night bring? Jeff Beck? John McLaughlin? Jack Bruce? Jan Hammer? In the end, none materialised but it hardly mattered – King enthralled a rammed Ronnie’s with 80 minutes of vibrant music.

Mark King and band at Ronnie’s

Opener ‘The Essential’ was a frenetic showcase for the horn section, with special mention for Nichol Thompson’s fantastically elastic trombone solo. Other tracks from that original solo album translated superbly to the live setting too including an almost reggaefied ‘Clocks Go Forward’ and extraordinary ‘There Is A Dog’, invested with the breezy Latin groove of early Return To Forever, some delicious percussion embellishments from Miles Bould and an appealingly demented Moog solo from Gary Husband. This was a complete celebration of rhythm, driven along by the killer engine room of Pete Biggin on drums, King on bass and keyboardists Mike Lindup and Husband, the last three all drummers in past lives. This was alluded to by King in one of his trademark bits of between-song banter – ‘For a band of drummers, you’d think we’d be able to play in time…’

Even the more poppy vocal material was full of weird jazz/rock touches – ‘Outstanding’ was hijacked by a striking Jan Hammer-ish Fender Rhodes figure from Husband while ‘Throwing Sevens’, introduced by King as ‘a really cheery song about suicide’, was just deranged, a mixture of ‘70s Herbie Hancock grooves and Zappa-style mayhem. Though coming from such an unpretentious though naturally gifted musician, this was patently world-class music, the kind of stuff Earth, Wind & Fire effortlessly excelled at in the late ‘70s. And one detects a definite growth in King’s bass skills with his finger-style playing particularly reaching new levels of clarity and flair.

When someone requested ‘Love Games’, King initially declined, deadpanning ‘Ronnie would be spinning in his grave!’, before leading the band into a slinky version of that very same tune which gave Level 42 their first UK hit over 30 years ago. He signed off with a cheery, ‘Right, whose round is it?’, a strangely touching finale to a really striking set. Jazz/rock’s loss has been pop’s gain over the last 25 years, but here’s hoping King doesn’t wait another quarter century to break out the dynamite fusion and funk.