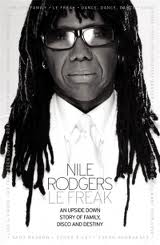 Nile Rodgers has spent his musical life on both sides of the studio glass, recording and writing hits with Chic and producing the likes of Diana Ross, Madonna, David Bowie, Sister Sledge, Johnny Mathis and Al Jarreau.

Chic were to disco what Steely Dan were to rock – they brought jazz chords, complex arrangements and subtly subversive lyrics to the top of the charts. Their combination of Rodgers’ slick Fender Strat, Bernard Edwards probing bass and Tony Thompson’s sizzling drums were one of the most recognisable sounds in music between 1977 and 1980, but, as ‘Le Freak‘ grippingly outlines, it was a very long way down when the group lost favour in the early ‘80s.

But this book is a very rare thing for a music autobiography – it’s gripping even when it steers clear of the music. Rodgers was born to a 14-year-old jazz-loving mother in late-1950s New York City, and his early life was a jaw-dropping sequence of underage sex, drug addiction and bohemian excess on all levels.

But there was a lot of love too – his stepfather Bobby, a heroin-addicted beatnik, nicknamed the asthmatic Rodgers ‘Pud’, short for ‘pudding pie’, and used to reprimand him thus: ‘Pud. Dig yourself.’ Soon, both parents were junkies, and Rodgers turned to TV, movies, truancy and illicit substances, finding his own brotherhood of outsider Puerto Ricans and Italians in Greenwich Village.

A fascinating cast of characters populate the first third of the book with notable cameos from Thelonious Monk, Lenny Bruce, Timothy Leary and Jimi Hendrix. And no matter how tough things get, it’s all shot through with Rodgers’ good humour and gift for the humdinging one-liner.

He’s also brilliant at capturing the flavour of the bohemian underground that flourished in the big cities of the US in the ‘60s. Rodgers’ musical coming of age makes for fascinating reading too, an intriguing portrait of the late-‘60s/early-‘70s black music scene. He studied jazz harmony with Dr Billy Taylor and Ted Dunbar and got a gig with the ‘Sesame Street’ house band. His Harlem Apollo debut saw him being chased around the stage by a crazed Screamin’ Jay Hawkins.

With musical soulmate Edwards, he toured the Chitlin’ Circuit playing the soul, jazz and R’n’B hits of the day, returning to New York to see that disco culture was taking over. Rodgers and Edwards’ Big Apple Band quickly became Chic, a black fusion of Roxy Music and KISS. And although Chic quickly became synonymous with the Disco movement, their roots in jazz, rock and R’n’B and desire to always include a Deep Hidden Meaning (or DHM) in their lyrics always kept them at some remove from the likes of The Bee Gees.

What follows is to some extent standard stuff – huge success and excess, cocaine, champagne, hanging out at Studio 54 etc – but again it can’t fail to be fascinating thanks to Rodgers’ always quirky take on events. And when things take a turn for the worse when the scene that embraced Chic suddenly implodes and gives way to New Wave, Rodgers is brutally candid about his embarrassment that his band is now seen as a musical pariah.

His solo career stalls and he questions whether he’s lost his musical talent. As he says, ‘I was searching for something, but whatever it was, it was eluding me.’ But then David Bowie came calling and he got back on track big-time, Let’s Dance leading to a myriad of great productions in the ‘80s and ‘90s, outlined in some detail here. But things are never that clear-cut, and further issues with booze and drugs follow.

Rodgers’ extended riff on the passing of his musical brother Bernard Edwards while on tour with a reformed Chic in Japan is both moving and perfectly judged, outlining his philosophy of music and life. ‘Le Freak’ is a fast-moving, beautifully-written account of the life of a self-confessed ‘half-hippie, half Black Panther’, and a must for anyone with even a passing interest in black music over the last 50 years.

For more on Nile Rodgers and Chic, also check out Ian MacDonald’s ‘The People’s Music‘.