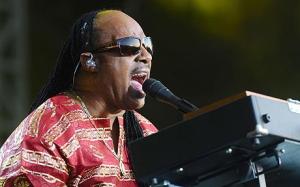 I parked the car behind the Albert Hall and set out across Hyde Park, almost bumping into Kate Middleton in dazzling red dress (yes, really…). What kind of omen was that for Stevie’s gig? The general consensus was that his last shows in London at the O2 a few years ago had been a bit long on instrumental breakdowns and short on hits, but this was ostensibly a celebration of his 60th birthday so surely a knockout set of singles was on the cards?

Too right.  A storming ‘Master Blaster (Jammin)’ had the huge audience enraptured. This was definitely going to be a festival gig that you couldn’t walk away from. Amy Winehouse and Pixie Lott were spotted throwing a few shapes. Apart from a few slightly left-field choices, (‘Ribbon In The Sky’, ‘As If You Read My Mind‘, ‘My Eyes Don’t Cry‘), we were treated to a smorgasbord of massive hits, beautifully rendered by a large band with drummer, two percussionists, two support keyboard players, two guitarists, three horns (thankfully no synth horns this time round) and three backing vocalists. ‘Do I Do‘ and ‘Don’t You Worry ‘Bout a Thing‘  thrilled with heavy Afro-Cuban percussion workouts and spicy horn lines, while a lengthy ‘If You Really Love Me‘ highlighted Wonder’s astonishing vocal range.

A very moving ‘Human Nature‘ pitted his sublime harmonica playing against Keith John‘s sweet vocals, reducing many audience members to tears. Indeed Michael Jackson’s memory loomed large over the whole gig with ‘Happy Birthday‘ also turning into a lengthy tribute. A killer medley of hits followed with ‘Higher Ground‘ a particular standout, Wonder’s clavinet playing so funky it was almost obscene. A spontaneous a cappella rendition of Alicia Keys’ ‘Empire State of Mind‘ surprised and delighted, a nod to one of the few in the new generation of soul superstars who may yet produce a body of work comparable to Wonder’s.

As Hyde Park rocked to ‘I Wish‘ and a closing, celebratory ‘Another Star‘, a perfect sunset descended behind the Albert Hall in a glorious finale to a thrilling concert and testament to the power of great music.