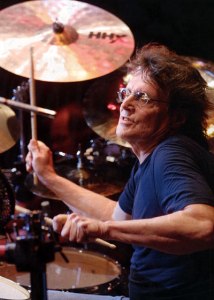 The drummer and composer Richie Hayward, who has died aged 64 after treatment for liver cancer, will be best remembered for his 40 years with Little Feat, the band he co-founded. His swinging, sure-footed and funky playing was the heart and soul of their music, and his subtle but always solid grooves powered along their enticing blend of funk, blues, jazz, soul, country and rock’n’roll.

He was born in Clear Lake, Iowa, and claims he was never the same again after seeing Sonny Payne, Count Basie’s legendary drummer, performing on television. From then on, Hayward became a drum disciple, and by the age of 10 had developed into a promising player inspired by the jazz and R’n’B of the day, artists such as Miles Davis, Ray Charles, Buddy Rich, Dave Brubeck and Sonny Rollins.

At 18, Hayward scraped together enough money for a plane ticket to Los Angeles, where he quickly found himself in a psychedelic offshoot of Frank Zappa’s Mothers of Invention called The Factory, featuring slide guitarist, songwriter and vocalist Lowell George. The band fizzled out but Hayward hooked up with George again in their new project Little Feat. They were quickly snapped up the expanding Warner Bros Records, also home of Ry Cooder, Randy Newman and Neil Young.

Little Feat’s first few albums were surreal, elliptical takes on the Hollywood scene in the guise of sleazy rock and blues vignettes. But on 1973′s Dixie Chicken a more sophisticated sound emerged embracing New Orleans swamp-funk and soulful vocals. Hayward’s Second Line beats on ‘Fat Man In The Bathtub‘ and the title track became legendary, his laid-back, half-time grooves now synonymous with the band. 1974′s Feats Don’t Fail Me Now was the first big-seller of their career, featuring a potpourri of tasty beats from Hayward from the fatback funk of ‘Skin It Back‘ and ‘Spanish Moon‘ to the frantic, almost fusionish ‘The Fan‘. 1975′s Last Record Album offered just as many treats, from the famous and much sampled groove drum solo at the tail end of ‘Day or Night‘ to the loose-limbed, trademark half-time funk of ‘One Love Stand‘. Hayward also became notorious at this stage of his career for crashing his motorcycle – a fact that didn’t go unnoticed by Lowell George who took to including Hayward’s medical bills (with a tragic irony) on the sleeve artwork for Last Record Album.

1977′s Time Loves a Hero was another career high point for Hayward, and a famous gig at the Rainbow in London with the Doobie Brothers secured the band’s legendary status. But Lowell George’s tragic death in 1979 left Little Feat in limbo, though Hayward was much in-demand as a session player, recording and touring with such rock royalty as Bob Dylan, Robert Plant, Robert Palmer, Bonnie Raitt and Peter Frampton. Hayward and Little Feat returned at the end of the ’80s with Let It Roll and they have remained a top live draw ever since, touring regularly.

In 2009, Hayward announced that he was being treated for a liver condition, later identified as cancer. He had moved to Vancouver Island with his Canadian wife, Shauna Drayson, whom he married in 2008, but did not qualify for state medical treatment and had no medical insurance. Little Feat and numerous friends, fans and fellow musicians organised benefit concerts and eBay auctions to raise money for him. He played his final live performance last month when he sat in with Little Feat at the Vancouver Island Music Festival.

He is survived by Shauna and his son, Severin.