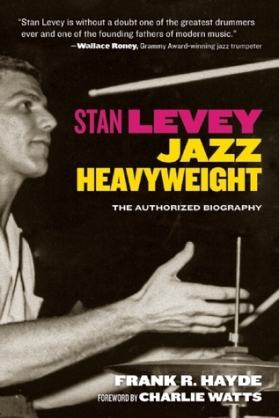 If Martin Scorsese ever gets round to making his jazz movie, he could do a lot worse than a Stan Levey biopic.

But in his young days, he was also a prizefighter and a junkie. He later became a devoted family man, played tuned percussion on hundreds of TV and film scores and also set up a successful photography business – this American life definitely had a second act, though many of his peers weren’t so lucky.

And yet Levey seems to be a somewhat forgotten musician, despite featuring regularly as a talking head on Ken Burns’ masterful ‘Jazz’ documentary. Hopefully Frank R. Hayde’s gripping ‘Jazz Heavyweight’ will change that. Authorised by the family and punctuated by contributions from Stan himself, it’s one of the great jazz books and a vital addition to the bebop bibliography.

Hayde’s style is succinct and punchy, perfectly complimenting the high-speed narrative. Many anecdotes stay in the mind: we find out how Charlie Parker infiltrated Levey into the nightmare of heroin, how Sonny Stitt set him up, how he was sacked by Benny Goodman, what it was like to tour with Ella Fitzgerald, how the Mafia infiltrated the bebop scene, how to chew the fat with Buddy Rich and Sinatra and what it was really like to play in one of the all-time great jazz groups on 52nd Street.

It’s a thrilling ride. I’ll be dipping into it again very soon. And there’s even a heartfelt foreword by Charlie Watts, if such things float your boat.