‘I Am Not Your Negro’ is a fascinating recent documentary about the writer and activist James Baldwin. In 1979, Baldwin wrote a letter to his literary agent outlining his next project, ‘Remember This House’, a personal account of the lives and assassinations of three close friends: Medgar Evers, Malcolm X and Martin Luther King. At the time of Baldwin’s death in 1987, he left behind only 30 completed pages of this manuscript. Raoul Peck’s film envisions the book, with Samuel L Jackson narrating Baldwin’s words.

‘I Am Not Your Negro’ expands to become a passionate, timely polemic about the history of the black man in America. The film pieces together a portrait of Baldwin’s political oration from various media sources; there are segments of Baldwin’s remarkable 1965 Cambridge University debate with William F Buckley; the 1963 roundtable discussion with Baldwin, Marlon Brando, Charlton Heston, Sidney Poitier and Harry Belafonte; and excerpts of Baldwin’s famous TV interviews with Dick Cavett.

‘I Am Not Your Negro’ also features an excellent jazzy soundtrack by Russian composer Alexei Aigui. And though – perhaps surprisingly – the key figures of the ’60s jazz protest movement (Miles, Nina Simone, Max Roach, Abbey Lincoln, Sonny Rollins, Archie Shepp, John Coltrane et al) are not mentioned in the film, it turns out that Miles and Baldwin were great friends.

Miles talks about Baldwin in his autobiography:

I remember being in awe of him because he was so goddamn heavy, all those great books he was writing, and so I didn’t know what to say to him. Later, I found out that he felt the same way about me. I really liked him right off the bat and he liked me a lot too. We had great respect for one another. He was a very shy person and I was too. I thought we looked like brothers. I had read his books and loved and respected what he had to say. As I got to know Jimmy, we opened up to each other and became great friends. Every time I went to play Antibes, I would always spend a day or two out at Jimmy’s house in St Paul de Vence. We would just sit in that great big beautiful house of his telling all kinds of stories, lying our asses off. Then we would go out to that wine garden he had and do the same thing. I really miss seeing him now when I go to southern France. He was a great man.

Quincy Troupe ghosted Miles’s autobiography. Troupe apparently broke the news of Baldwin’s death to Miles in 1987, and records Miles’s reaction in his own memoir ‘Miles And Me’:

I told him that James Baldwin had died. Miles had known that Jimmy was sick but was convinced that – of all his friends – Jimmy would outlive him. I thought I was tears in his eyes but, if there were, Miles covered them up well by excusing himself and going to the bathroom. One thing was certain: Miles Davis wasn’t going to let me or anyone else see him cry. But I think on that cold December day in 1987 Miles Davis did cry for his great friend. After I asked him if he was going to attend Baldwin’s funeral, he said, ‘I ain’t going to no funeral. I don’t like no goddamn funerals, even if it is Jimmy Baldwin’s. I want to remember him in life, in the flesh, when he was livin’ and was a bad motherf***a and not some ghost of himself layin’ up in no coffin..’ Throughout that day, we talked about many of his friends who had died – Monk, Bird, Coltrane, Bud Powell and many, many others. But he talked about his old drummer Philly Joe Jones the most. It was clear that Miles had loved Philly Joe, and that day it was also clear that Miles had loved James Baldwin deeply. 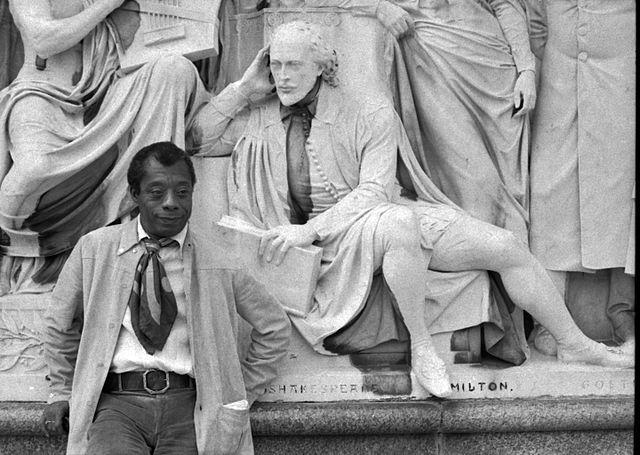